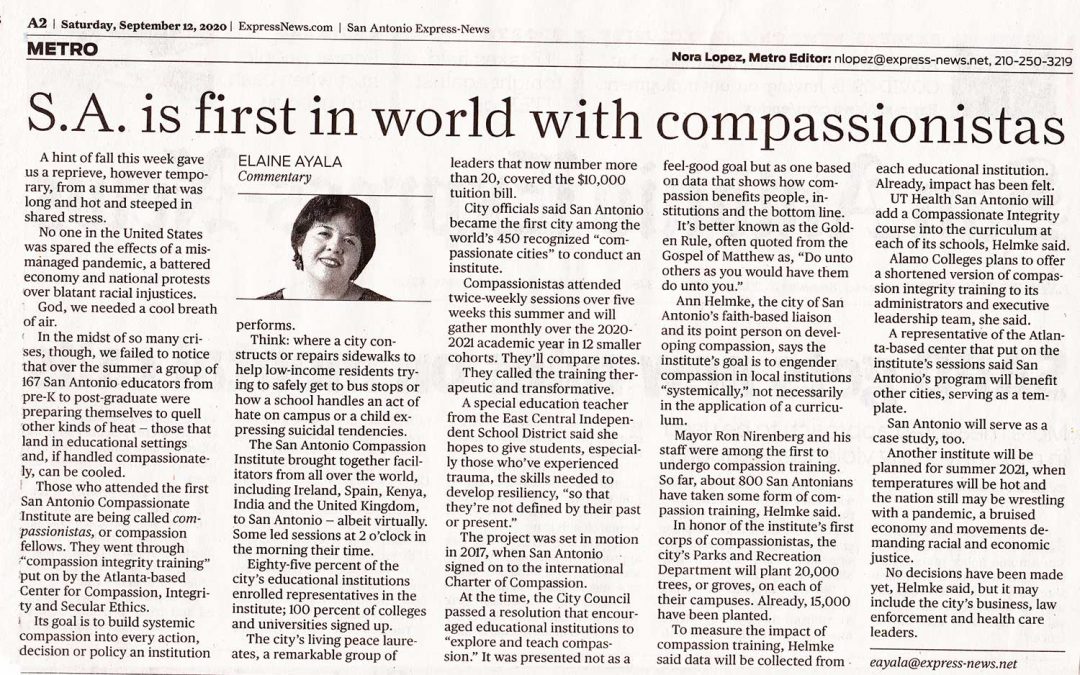 A hint of fall this week gave us a reprieve, however temporary, from a summer that was long and hot and steeped in shared stress.

No one in the United States was spared the effects of a mismanaged pandemic, a battered economy and national protests over blatant racial injustices.

God, we needed a cool breath of air.

In the midst of so many crises, though, we failed to notice that over the summer a group of 167 San Antonio educators from pre-K to post-graduate were preparing themselves to quell other kinds of heat — those that land in educational settings and, if handled compassionately, can be cooled.

Those who attended the first San Antonio Compassionate Institute are being called compassionistas, or compassion fellows. They went through “compassion integrity training” put on by the Atlanta-based Center for Compassion, Integrity and Secular Ethics.

Its goal is to build systemic compassion into every action, decision or policy an institution performs.

Think: where a city constructs or repairs sidewalks to help low-income residents trying to safely get to bus stops or how a school handles an act of hate on campus or a child expressing suicidal tendencies.

The San Antonio Compassion Institute brought together facilitators from all over the world, including Ireland, Spain, Kenya, India and the United Kingdom, to San Antonio — albeit virtually. Some led sessions at 2 o’clock in the morning their time.

Eighty-five percent of the city’s educational institutions enrolled representatives in the institute; 100 percent of colleges and universities signed up.

The city’s living peace laureates, a remarkable group of leaders that now number more than 20, covered the $10,000 tuition bill.

Compassionistas attended twice-weekly sessions over five weeks this summer and will gather monthly over the 2020-2021 academic year in 12 smaller cohorts. They’ll compare notes.

They called the training therapeutic and transformative.

A special education teacher from the East Central Independent School District said she hopes to give students, especially those who’ve experienced trauma, the skills needed to develop resiliency, “so that they’re not defined by their past or present.”

The project was set in motion in 2017, when San Antonio signed on to the international Charter of Compassion.

At the time, the City Council passed a resolution that encouraged educational institutions to “explore and teach compassion.” It was presented not as a feel-good goal but as one based on data that shows how compassion benefits people, institutions and the bottom line.

It’s better known as the Golden Rule, often quoted from the Gospel of Matthew as, “Do unto others as you would have them do unto you.”

Ann Helmke, the city of San Antonio’s faith-based liaison and its point person on developing compassion, says the institute’s goal is to engender compassion in local institutions “systemically,” not necessarily in the application of a curriculum.

In honor of the institute’s first corps of compassionistas, the city’s Parks and Recreation Department will plant 20,000 trees, or groves, on each of their campuses. Already, 15,000 have been planted.

To measure the impact of compassion training, Helmke said data will be collected from each educational institution. Already, impact has been felt.

UT Health San Antonio will add a Compassionate Integrity course into the curriculum at each of its schools, Helmke said.

Alamo Colleges plans to offer a shortened version of compassion integrity training to its administrators and executive leadership team, she said.

A representative of the Atlanta-based center that put on the institute’s sessions said San Antonio’s program will benefit other cities, serving as a template.

San Antonio will serve as a case study, too.

Another institute will be planned for summer 2021, when temperatures will be hot and the nation still may be wrestling with a pandemic, a bruised economy and movements demanding racial and economic justice.

No decisions have been made yet, Helmke said, but it may include the city’s business, law enforcement and health care leaders.