NEWS – Ayala: San Antonio blessed with a peace laureate that feeds the hungry 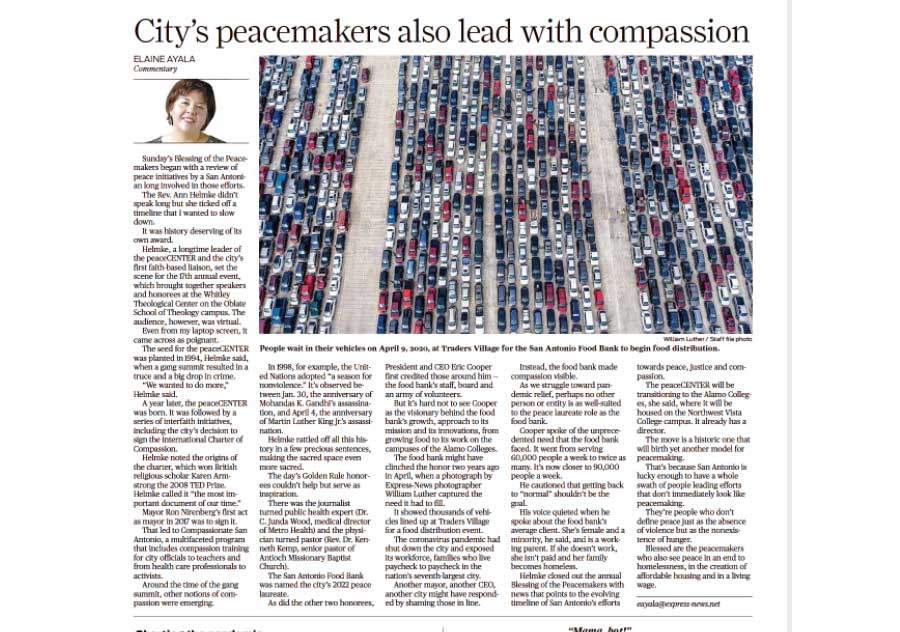 Sunday’s Blessing of the Peacemakers began with a review of peace initiatives by a San Antonian long involved in those efforts.

The Rev. Ann Helmke didn’t speak long but she ticked off a timeline that I wanted to slow down.

t was history deserving of its own award.

Helmke, a longtime leader of the peaceCENTER and the city’s first faith-based liaison, set the scene for the 17th annual event, which brought together speakers and honorees at the Whitley Theological Center on the Oblate School of Theology campus. The audience, however, was virtual.

Even from my laptop screen, it came across as poignant.

The seed for the peaceCENTER was planted in 1994, Helmke said, when a gang summit resulted in a truce and a big drop in crime.

“We wanted to do more,” Helmke said.

A year later, the peaceCENTER was born. It was followed by a series of interfaith initiatives, including the city’s decision to sign the international Charter of Compassion.

Helmke noted the origins of the charter, which won British religious scholar Karen Armstrong the 2008 TED Prize. Helmke called it “the most important document of our time.”

Mayor Ron Nirenberg’s first act as mayor in 2017 was to sign it.

That led to Compassionate San Antonio, a multifaceted program that includes compassion training for all sorts of people, from city officials to teachers and from healthcare professionals to activists.

Around the time of the gang summit, other notions of compassion were emerging.

Helmke rattled off all this history in a few, precious sentences, making the sacred space even more sacred.

As did the other two honorees, President and CEO Eric Cooper first credited those around him — the food bank’s staff, board and an army of volunteers.

But it’s hard not to see Cooper as the visionary behind the food bank’s growth, approach to its mission and its innovations, from growing food to its work on the campuses of the Alamo Colleges.

The food bank might have clinched the honor two years ago in April, when a photograph by Express-News photographer William Luther captured the need it had to fill.

It showed thousands of vehicles lined up at Traders Village for a food distribution event.

The coronavirus pandemic had shut down the city and exposed its workforce, families who live paycheck to paycheck in the nation’s seventh-largest city.

Another mayor, another CEO, another city might have responded by shaming those in line.

Instead, the food bank made compassion visible.

As we struggle toward pandemic relief, perhaps no other person or entity is as well-suited to the peace laureate role as the food bank.

He cautioned that getting back to “normal” shouldn’t be the goal.

His voice quieted when he spoke about the food bank’s average client. She’s female and a minority, he said, and is a working parent. If she doesn’t work, she isn’t paid and her family becomes homeless.

Helmke closed out the annual Blessing of the Peacemakers with news that points to the evolving timeline of San Antonio’s efforts towards peace, justice and compassion.

The peaceCENTER will be transitioning to the Alamo Colleges, she said, where it will be housed on the Northwest Vista College campus. It already has a director.

The move is a historic one that will birth yet another model for peacemaking.

That’s because San Antonio is lucky enough to have a whole swath of people leading efforts that don’t immediately look like peacemaking.

They’re people who don’t define peace just as the absence of violence but as the nonexistence of hunger.

Blessed are the peacemakers who also see peace in an end to homelessness, in the creation of affordable housing and in a living wage.