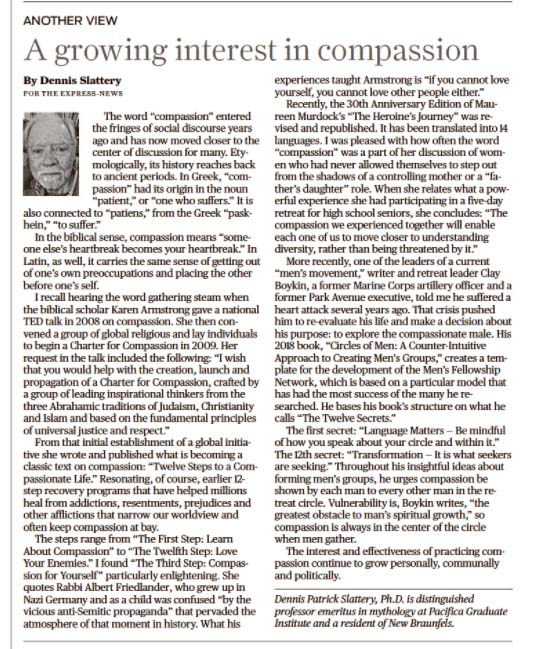 The word “compassion” entered the fringes of social discourse years ago and has now moved closer to the center of discussion for many. Etymologically, its history reaches back to ancient periods. In Greek, “compassion” had its origin in the noun “patient,” or “one who suffers.” It is also connected to “patiens,” from the Greek “paskhein,” “to suffer.”

In the biblical sense, compassion means “someone else’s heartbreak becomes your heartbreak.” In Latin, as well, it carries the same sense of getting out of one’s own preoccupations and placing the other before one’s self.

I recall hearing the word gathering steam when the biblical scholar Karen Armstrong gave a national TED talk in 2008 on compassion. She then convened a group of global religious and lay individuals to begin a Charter for Compassion in 2009. Her request in the talk included the following: “I wish that you would help with the creation, launch and propagation of a Charter for Compassion, crafted by a group of leading inspirational thinkers from the three Abrahamic traditions of Judaism, Christianity and Islam and based on the fundamental principles of universal justice and respect.”

From that initial establishment of a global initiative she wrote and published what is becoming a classic text on compassion: “Twelve Steps to a Compassionate Life.” Resonating, of course, earlier 12-step recovery programs that have helped millions heal from addictions, resentments, prejudices and other afflictions that narrow our worldview and often keep compassion at bay.

The steps range from “The First Step: Learn About Compassion” to “The Twelfth Step: Love Your Enemies.” I found “The Third Step: Compassion for Yourself” particularly enlightening. She quotes Rabbi Albert Friedlander, who grew up in Nazi Germany and as a child was confused “by the vicious anti-Semitic propaganda” that pervaded the atmosphere of that moment in history. What his experiences taught Armstrong is “if you cannot love yourself, you cannot love other people either.”

Recently, the 30th Anniversary Edition of Maureen Murdock’s “The Heroine’s Journey” was revised and republished. It has been translated into 14 languages. I was pleased with how often the word “compassion” was a part of her discussion of women who had never allowed themselves to step out from the shadows of a controlling mother or a “father’s daughter” role. When she relates what a powerful experience she had participating in a five-day retreat for high school seniors, she concludes: “The compassion we experienced together will enable each one of us to move closer to understanding diversity, rather than being threatened by it.”

More recently, one of the leaders of a current “men’s movement,” writer and retreat leader Clay Boykin, a former Marine Corps artillery officer and a former Park Avenue executive, told me he suffered a heart attack several years ago. That crisis pushed him to re-evaluate his life and make a decision about his purpose: to explore the compassionate male. His 2018 book, “Circles of Men: A Counter-Intuitive Approach to Creating Men’s Groups,” creates a template for the development of the Men’s Fellowship Network, which is based on a particular model that has had the most success of the many he researched. He bases his book’s structure on what he calls “The Twelve Secrets.”

The first secret: “Language Matters — Be mindful of how you speak about your circle and within it.” The 12th secret: “Transformation — It is what seekers are seeking.” Throughout his insightful ideas about forming men’s groups, he urges compassion be shown by each man to every other man in the retreat circle. Vulnerability is, Boykin writes, “the greatest obstacle to man’s spiritual growth,” so compassion is always in the center of the circle when men gather.

The interest and effectiveness of practicing compassion continue to grow personally, communally and politically.

Dennis Patrick Slattery, Ph.D. is distinguished professor emeritus in mythology at Pacifica Graduate Institute and a resident of New Braunfels.