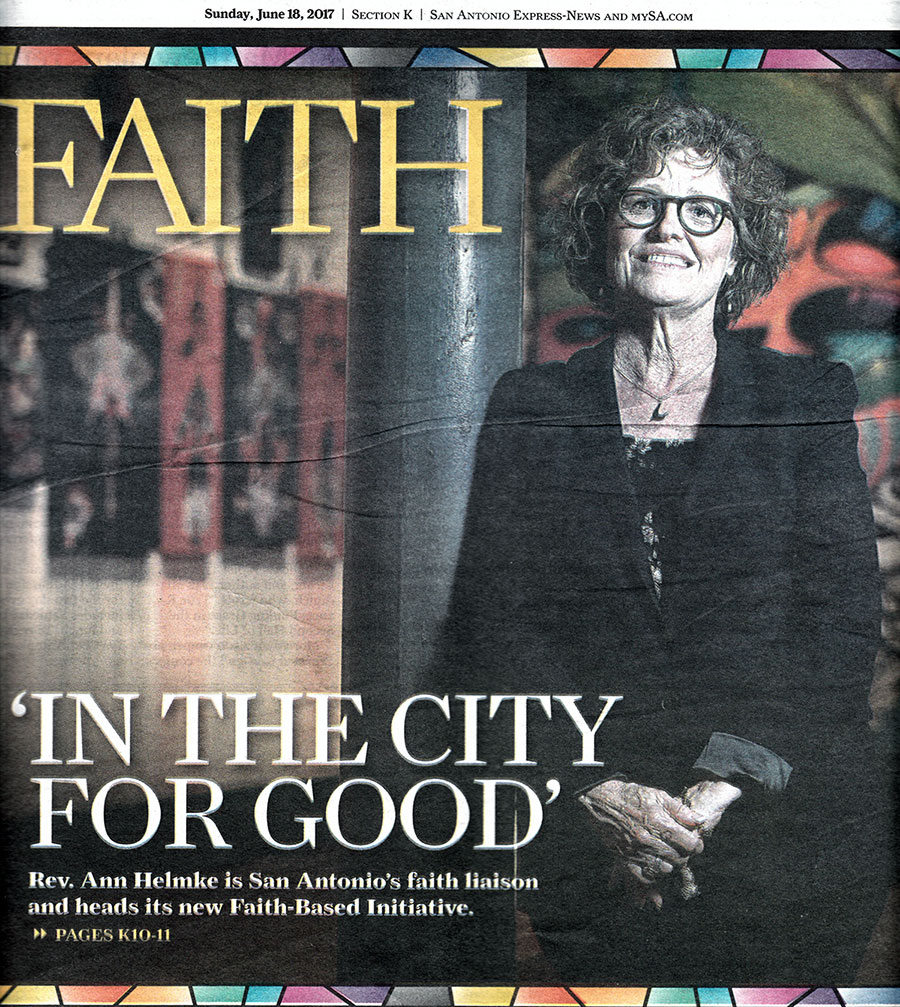 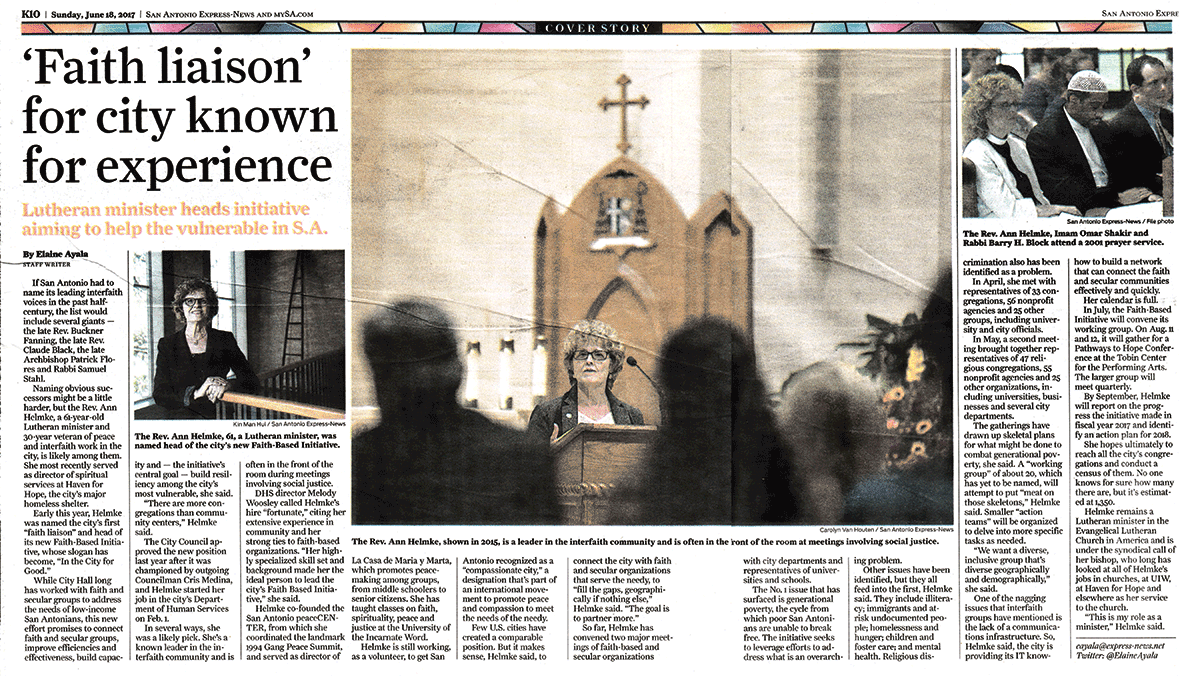 If San Antonio had to name its leading interfaith voices in the past half-century, the list would include several giants — the late Rev. Buckner Fanning, the late Rev. Claude Black, the late Archbishop Patrick Flores and Rabbi Samuel Stahl.

Naming obvious successors might be a little harder, but the Rev. Ann Helmke, a 61-year-old Lutheran minister and 30-year veteran of peace and interfaith work in the city, is likely among them. She most recently served as director of spiritual services at Haven for Hope, the city’s major homeless shelter.

Early this year, Helmke was named the city’s first “faith liaison” and head of its new Faith-Based Initiative, whose slogan has become, “In the City for Good.”

“There are more congregations than community centers,” Helmke said.

The City Council approved the new position last year after it was championed by outgoing Councilman Cris Medina, and Helmke started her job in the city’s Department of Human Services on Feb. 1.

In several ways, she was a likely pick. She’s a known leader in the interfaith community and is often in the front of the room during meetings involving social justice.

DHS director Melody Woosley called Helmke’s hire “fortunate,” citing her extensive experience in community and her strong ties to faith-based organizations. “Her highly specialized skill set and background made her the ideal person to lead the city’s Faith Based Initiative,” she said.

Helmke co-founded the San Antonio peaceCENTER, from which she coordinated the landmark 1994 Gang Peace Summit, and served as director of La Casa de Maria y Marta, which promotes peacemaking among groups, from middle schoolers to senior citizens. She has taught classes on faith, spirituality, peace and justice at the University of the Incarnate Word.

Helmke is still working, as a volunteer, to get San Antonio recognized as a “compassionate city,” a designation that’s part of an international movement to promote peace and compassion to meet the needs of the needy.

Few U.S. cities have created a comparable position. But it makes sense, Helmke said, to connect the city with faith and secular organizations that serve the needy, to “fill the gaps, geographically if nothing else,” Helmke said. “The goal is to partner more.”

So far, Helmke has convened two major meetings of faith-based and secular organizations with city departments and representatives of universities and schools.

The No. 1 issue that has surfaced is generational poverty, the cycle from which poor San Antonians are unable to break free. The initiative seeks to leverage efforts to address what is an overarching problem.

Other issues have been identified, but they all feed into the first, Helmke said. They include illiteracy; immigrants and at-risk undocumented people; homelessness and hunger; children and foster care; and mental health. Religious discrimination also has been identified as a problem.

In April, she met with representatives of 33 congregations, 56 nonprofit agencies and 25 other groups, including university and city officials.

In May, a second meeting brought together representatives of 47 religious congregations, 55 nonprofit agencies and 25 other organizations, including universities, businesses and several city departments.

The gatherings have drawn up skeletal plans for what might be done to combat generational poverty, she said. A “working group” of about 20, which has yet to be named, will attempt to put “meat on those skeletons,” Helmke said. Smaller “action teams” will be organized to delve into more specific tasks as needed.

“We want a diverse, inclusive group that’s diverse geographically and demographically,” she said.

One of the nagging issues that interfaith groups have mentioned is the lack of a communications infrastructure. So, Helmke said, the city is providing its IT know-how to build a network that can connect the faith and secular communities effectively and quickly.

Her calendar is full.

In July, the Faith-Based Initiative will convene its working group. On Aug. 11 and 12, it will gather for a Pathways to Hope Conference at the Tobin Center for the Performing Arts. The larger group will meet quarterly.

By September, Helmke will report on the progress the initiative made in fiscal year 2017 and identify an action plan for 2018.

She hopes ultimately to reach all the city’s congregations and conduct a census of them. No one knows for sure how many there are, but it’s estimated at 1,350.

Helmke remains a Lutheran minister in the Evangelical Lutheran Church in America and is under the synodical call of her bishop, who long has looked at all of Helmke’s jobs in churches, at UIW, at Haven for Hope and elsewhere as her service to the church.

“This is my role as a minister,” Helmke said.