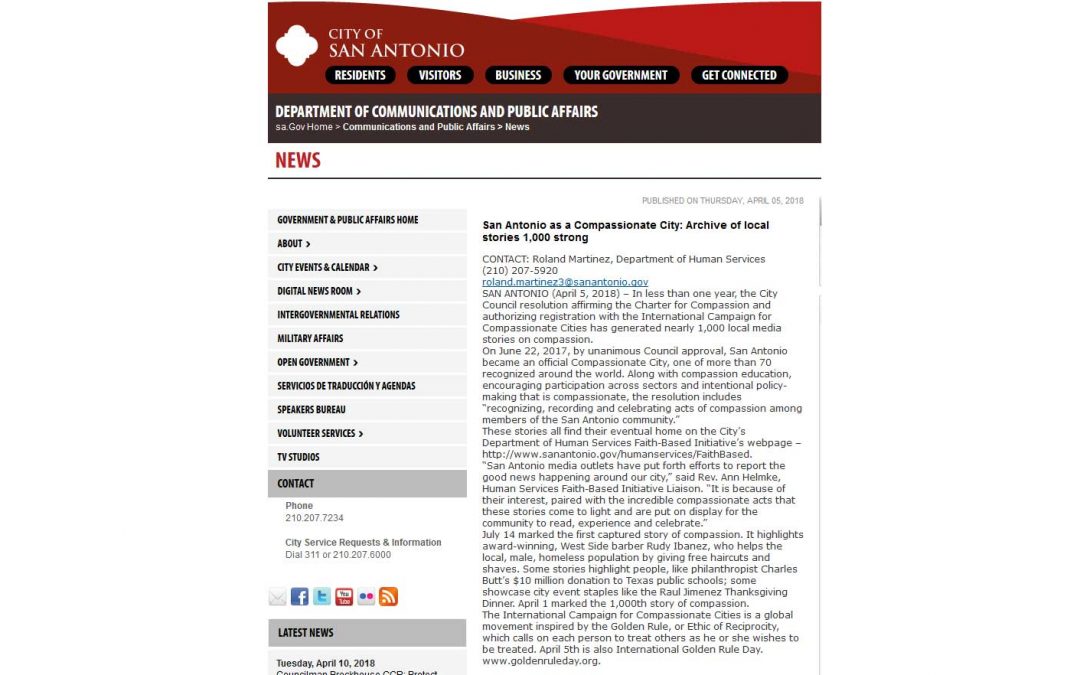 SAN ANTONIO (April 5, 2018) – In less than one year, the City Council resolution affirming the Charter for Compassion and authorizing registration with the International Campaign for Compassionate Cities has generated nearly 1,000 local media stories on compassion.

On June 22, 2017, by unanimous Council approval, San Antonio became an official Compassionate City, one of more than 70 recognized around the world. Along with compassion education, encouraging participation across sectors and intentional policy-making that is compassionate, the resolution includes “recognizing, recording and celebrating acts of compassion among members of the San Antonio community.”

These stories all find their eventual home on the City’s Department of Human Services Faith-Based Initiative’s webpage – http://www.sanantonio.gov/humanservices/FaithBased.

“San Antonio media outlets have put forth efforts to report the good news happening around our city,” said Rev. Ann Helmke, Human Services Faith-Based Initiative Liaison. “It is because of their interest, paired with the incredible compassionate acts that these stories come to light and are put on display for the community to read, experience and celebrate.”

The International Campaign for Compassionate Cities is a global movement inspired by the Golden Rule, or Ethic of Reciprocity, which calls on each person to treat others as he or she wishes to be treated. April 5th is also International Golden Rule Day. www.goldenruleday.org.