Nickie Valdez: Affirming the LGBTQI community as children of God 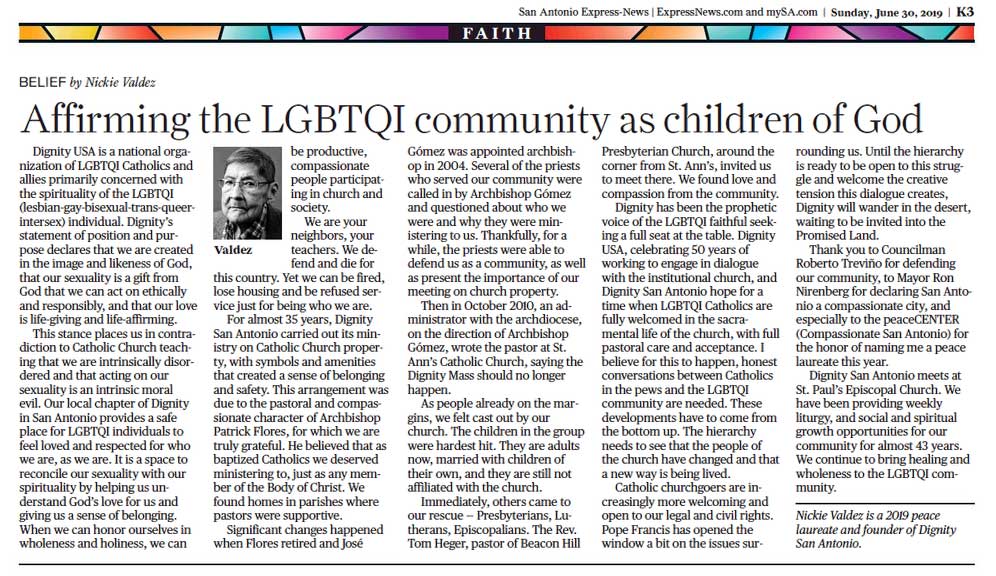 Dignity USA is a national organization of LGBTQI Catholics and allies primarily concerned with the spirituality of the LGBTQI (lesbian-gay-bisexual-trans-queerintersex) individual. Dignity’s statement of position and purpose declares that we are created in the image and likeness of God, that our sexuality is a gift from God that we can act on ethically and responsibly, and that our love is life-giving and life-affirming.

This stance places us in contradiction to Catholic Church teaching that we are intrinsically disordered and that acting on our sexuality is an intrinsic moral evil. Our local chapter of Dignity in San Antonio provides a safe place for LGBTQI individuals to feel loved and respected for who we are, as we are. It is a space to reconcile our sexuality with our spirituality by helping us understand God’s love for us and giving us a sense of belonging. When we can honor ourselves in wholeness and holiness, we can be productive, compassionate people participating in church and society.

We are your neighbors, your teachers. We defend and die for this country. Yet we can be fired, lose housing and be refused service just for being who we are.

For almost 35 years, Dignity San Antonio carried out its ministry on Catholic Church property, with symbols and amenities that created a sense of belonging and safety. This arrangement was due to the pastoral and compassionate character of Archbishop Patrick Flores, for which we are truly grateful. He believed that as baptized Catholics we deserved ministering to, just as any member of the Body of Christ. We found homes in parishes where pastors were supportive.

Significant changes happened when Flores retired and José Gómez was appointed archbishop in 2004. Several of the priests who served our community were called in by Archbishop Gómez and questioned about who we were and why they were ministering to us. Thankfully, for a while, the priests were able to defend us as a community, as well as present the importance of our meeting on church property.

Then in October 2010, an administrator with the archdiocese, on the direction of Archbishop Gómez, wrote the pastor at St. Ann’s Catholic Church, saying the Dignity Mass should no longer happen.

As people already on the margins, we felt cast out by our church. The children in the group were hardest hit. They are adults now, married with children of their own, and they are still not affiliated with the church.

Immediately, others came to our rescue — Presbyterians, Lutherans, Episcopalians. The Rev. Tom Heger, pastor of Beacon Hill Presbyterian Church, around the corner from St. Ann’s, invited us to meet there. We found love and compassion from the community.

Dignity has been the prophetic voice of the LGBTQI faithful seeking a full seat at the table. Dignity USA, celebrating 50 years of working to engage in dialogue with the institutional church, and Dignity San Antonio hope for a time when LGBTQI Catholics are fully welcomed in the sacramental life of the church, with full pastoral care and acceptance. I believe for this to happen, honest conversations between Catholics in the pews and the LGBTQI community are needed. These developments have to come from the bottom up. The hierarchy needs to see that the people of the church have changed and that a new way is being lived.

Catholic churchgoers are increasingly more welcoming and open to our legal and civil rights. Pope Francis has opened the window a bit on the issues surrounding us. Until the hierarchy is ready to be open to this struggle and welcome the creative tension this dialogue creates, Dignity will wander in the desert, waiting to be invited into the Promised Land.

Thank you to Councilman Roberto Treviño for defending our community, to Mayor Ron Nirenberg for declaring San Antonio a compassionate city, and especially to the peaceCENTER (Compassionate San Antonio) for the honor of naming me a peace laureate this year.

Dignity San Antonio meets at St. Paul’s Episcopal Church. We have been providing weekly liturgy, and social and spiritual growth opportunities for our community for almost 43 years. We continue to bring healing and wholeness to the LGBTQI community.

Nickie Valdez is a 2019 peace laureate and founder of Dignity San Antonio.