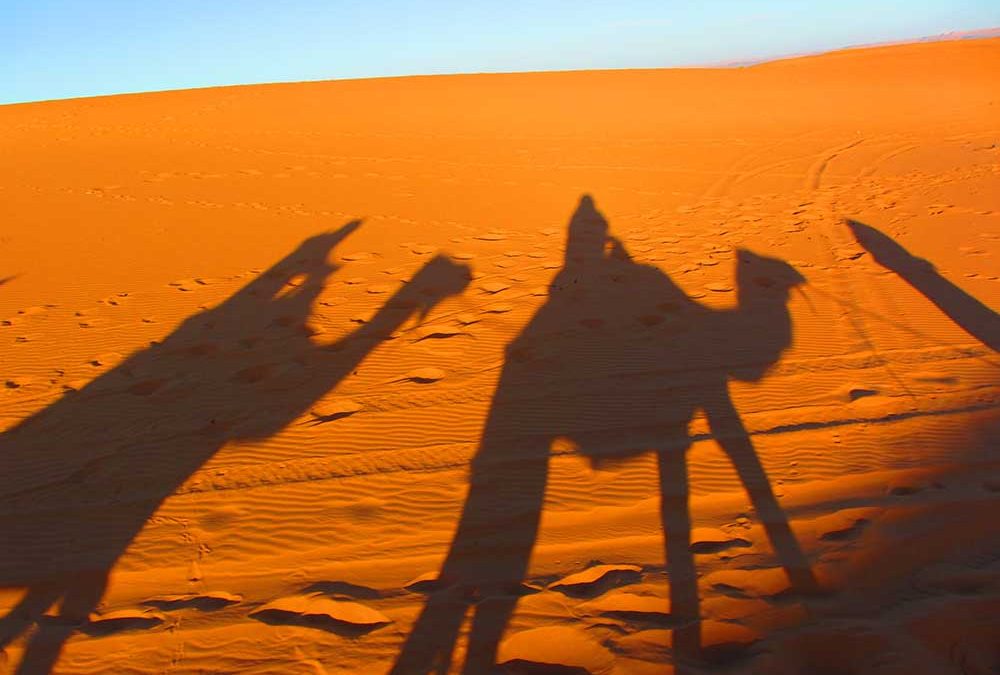 A herd of camels happened to be passing an orchard, the owner of which was seated on the sinsileh, a rough stone fence. One of the animals, a very fine male, caught the overhanging branch of a fruit tree and broke it off with his teeth. The owner of the orchard snatched up a stone and threw it at the camel. The aim was unexpectedly true, and the camel fell dead. Its owner, furious at the loss of his property, snatched up the same stone and threw it with as deadly accuracy at the owner of the orchard. He struck him on his head, and instantly the man died. The camel-herd was horrified at his own rash act. He realized what the con¬sequences of killing a man would be. He leapt on to the fastest of his beasts, leaving the rest to fend for themselves, and fled as fast as he could. He was followed by the sons of the man in the orchard, and was forced to return with them to the scene of the tragedy.

It happened that the camp of the Caliph Omar ibn el Khattab was very near by. The sons of the dead orchard-owner demanded that the man who had slain their father be executed. The poor camel-herd explained that he had not intentionally committed the crime. He said he was provoked by the death of his camel…. but, as he had no witnesses to prove that he was speaking the truth, the Caliph ordered that he be beheaded.

In those times, it was customary for an execution to take place almost immediately after the sentence was passed. The procedure was as follows: a leather hide called nut’ a was spread in the ruler’s presence, and the person to be beheaded had to kneel on this hide with his hands tied behind his back. The executioner, standing behind him with his sword ready, asked so all could hear, “Oh, Commander of the Faithful, is it indeed your decision that this man be caused to forsake this world?” If the Caliph answered” yes,” then the executioner asked the same question a second time. If again the Caliph answered “yes”, he asked it once again for the third and last time, and immediately afterwards, unless the ruler instantly revoked the order, the executioner struck off the prisoner’s head.

On this occasion, the condemned, finding that his life about to end, begged the Caliph to grant him three days to go to his distant tent and arrange his family affairs. He swore that at the end of the three days he would return and serve his sentence. The Caliph accepted on condition that the man find someone willing to die in his place in case he did not return.

The poor man looked around him at the crowd of strangers. The nut’ a was brought and the executioner came forward. In despair the camel-herd cried out, “Does the race of the virtuous (ahl al muruwa)not exist?” He received no answer, and he repeated the question with yet greater emphasis. At this point, Abu Dhur, who was one of the sahaba, or companions of the Prophet, stepped forward and offered the Caliph to stand in for the man.

Much surprised, the Caliph granted his request. He warned that his own life would be sacrificed in case the man did not return within the three days. Abu Dhur agreed to this, and the condemned was set free. He started off at a run and was soon out of sight.

The three days passed, and the camel-herd did not return. Nobody believed that he would return. Omar ibn al Khattab, being pressed by the dead man’s relatives, gave orders that Abu Dhur should be executed. The hide was brought and Abu Dhur, with his hands tied behind his back, knelt down on it. His friends and relatives cried tears of grief.

Twice, in a voice that was heard above the noise of the gathered people, the executioner asked the if it was indeed the ruler’s will that the noble man should quit the world. Twice Omar grimly answered “yes”. Just before the question was asked for the third and last time, someone cried out, “For Allah’s sake, stop: here comes someone running!” At a sign from the Caliph the executioner remained silent, and, to every¬one’s astonishment, the man who three days previously had been condemned to die ran up out of breath and, with the words, “Praise be to Allah,” sank exhausted to the ground.

“In order to prove that the race of the trustworthy has not yet perished.” said the man, who was now kneeling on the hide from which Abu Dhur had gotten up.

“Explain yourself,” said the Prince of the Faithful.

“Some time ago,” said the man, “a poor widow came to me and entrusted me with some belongings that are of value to her. As I had to leave our camp on business, I took the things into the desert and hid them under a rock in a place that no one but I could find, and there they were when I was condemned to die. If my life not been spared for a few days, I would have died with a heavy heart. The knowledge of the hiding-place would have died with me; the woman would have lost her valuables; and my children would have heard her curse my memory without being able to clear it. Now, that I have arranged my household affairs and have returned the belongings to the woman, I can die with a light heart.”

On hearing this Omar turned to Abu Dhur, and asked, “Is this man any friend or relative of yours?”

“WalIahi! By God!” replied Abu Dhur, “I assure you, oh Prince of the Faithful, that I never set eyes on him till three days ago.”

“Then why were you such a fool as to risk your life for him? If he had not returned, I was determined that you would be executed in his place.”

“I did so in order to prove that trust and truth had not yet died ,” replied Abu Dhur.

When he heard this answer the Caliph was quiet; then, turning to the kneeling man, he said, “As it has been proved that there is still truth and trust among men, it remains for me to show that there is still compassion and kindness and forgiveness among men. I therefore pardon you, you are free to go.”