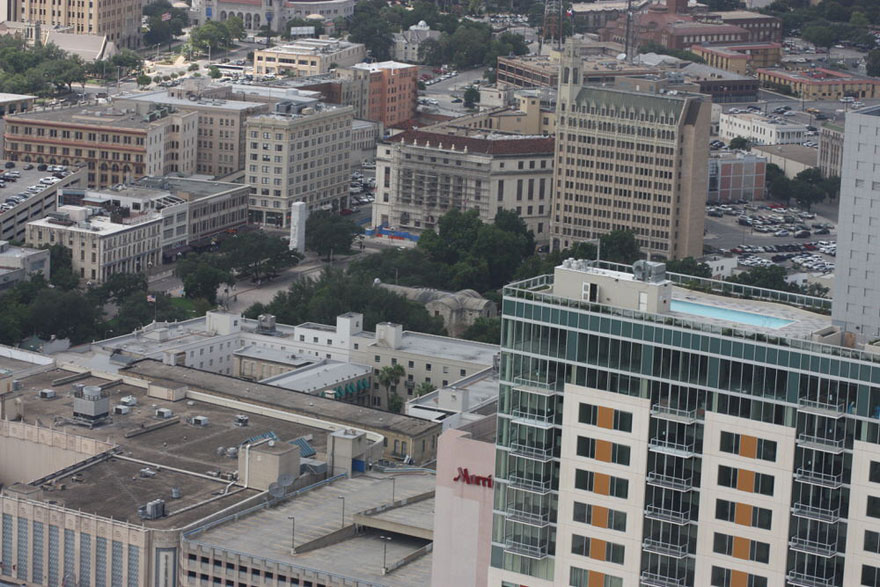 Sometimes I think the universe conspires to send me a message. This weekend the message was PERSPECTIVE. It’s an interesting word from the late 14c., when it meant “science of optics,” from Latin perspectus, “clearly perceived,” past participle of perspicere, “inspect, look through, look closely at,” from per– “through” + specere “look at.” The “art of drawing objects so as to give appearance of distance or depth” is first found 1590s, influenced by Italian prospettiva, an artists’ term. The figurative meaning “mental outlook over time” is first recorded 1762. Got that?

The first images to cross my path were a series of photos of famous landmarks, pictured first closely, then from far away. Central Park. The Great Wall of China. And, especially relevant to us here in San Antonio, the Alamo. People seeing it for the first time are always shocked. Perhaps they are influenced by the John Wayne film, where Crockett first see the Alamo away in the distance across a treeless plain (instead of across the street from Ripley’s Believe It Or Not.) In person it is small, urban.

We see one thing close-in, another from a distance. One perspective is not better than another: just different. It’s a reminder that sometimes we can be to close and need to pull back. Other times, we are to far away to see the details.

The second image. The air was always there, although I didn’t see it or think about it. It’s a reminder that my human perception is frail. Plato reminds us of this, in The Republic:

“Thus (through perspective) every sort of confusion is revealed within us; and this is that weakness of the human mind on which the art of conjuring and of deceiving by light and shadow and other ingenious devices imposes, having an effect upon us like magic… And the arts of measuring and numbering and weighing come to the rescue of the human understanding – there is the beauty of them – and the apparent greater or less, or more or heavier, no longer have the mastery over us, but give way before calculation and measure and weight?”

And the final image. Pretty clear: the other person might legitimately be seeing something different. I had a chuckle when I first read this. If the professor had actually said this book is READ rather than RED the meaning would have been changed but the little argument might still have ensued. Sometimes what I hear is different from what I see.

So what does this have to do with compassion? For me, when I lack compassion it is often because I do not see where and why compassion is needed. My eyes are not open to the suffering. My perspective is skewed. Do you find this to be true?