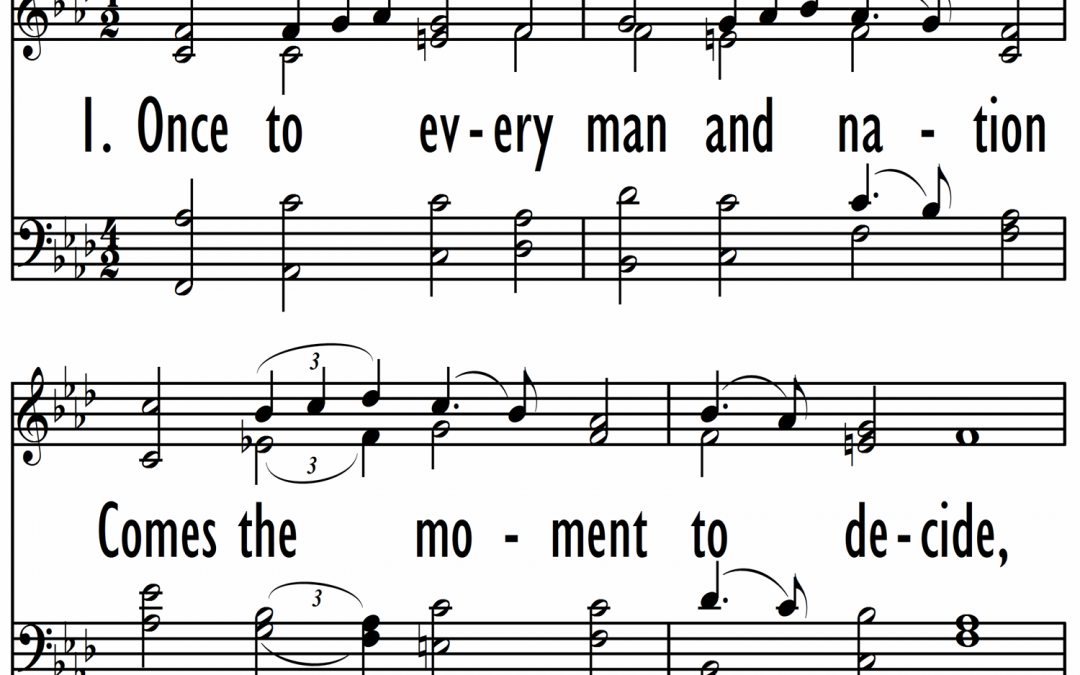 When a deed is done for Freedom, through the broad earth’s aching breast
Runs a thrill of joy prophetic, trembling on from east to west,
And the slave, where’er he cowers, feels the soul within him climb
To the awful verge of manhood, as the energy sublime
Of the century bursts full-blossomed on the thorny stem of Time.

Through the walls of hut and palace shoots the instantaneous throe,
When the travail of the Ages wrings earth’s systems to and fro;
At the birth of each new Era, with a recognizing start,
Nation wildly looks at nation, standing with mute lips apart,
And glad Truth’s yet mightier man-child leaps beneath the Future’s heart.

So the Evil’s triumph sendeth, with a terror and a chill,
Under continent to continent, the sense of coming ill,
And the slave, where’er he cowers, feels his sympathies with God
In hot tear-drops ebbing earthward, to be drunk up by the sod,
Till a corpse crawls round unburied, delving in the nobler clod.

For mankind are one in spirit, and an instinct bears along,
Round the earth’s electric circle, the swift flash of right or wrong;
Whether conscious or unconscious, yet Humanity’s vast frame
Though its ocean-sundered fibres feels the gush of joy or shame; —
In the gain or loss of one race all the rest have equal claim.

Once to every man and nation comes the moment to decide;
In the strife of Truth with Falsehood, for the good or evil side;
Some great cause, God’s new Messiah, offering each the bloom or blight,
Parts the goats upon the left hand and the sheep upon the right,
And the choice goes by forever ‘twixt that darkness and that light.

Hast thou chosen, O my people, on whose party thou shalt stand,
Ere the Doom from its worn sandals shakes the dust against our land?
Though the cause of Evil prosper, yet ’tis Truth alone is strong,
And, albeit she wander outcast now, I see around her throng
Troops of beautiful, tall angels, to enshield her from all wrong.

Backward look across the ages and the beacon-moments see,
That, like peaks of some sunk continent, jut through Oblivion’s sea;
Not an ear in court or market for the low foreboding cry
Of those Crises, God’s stern winnowers, from whose feet earth’s chaff must fly;
Never shows the choice momentous till the judgment hath passed by.

Careless seems the great Avenger; history’s page but record
One death- grapple in the darkness ‘twist old system and the Word;
Truth forever on the scaffold, Wrong forever on the throne, —
Yet that scaffold sways the future, and, behind the dim unknown,
Standeth God within the shadow, keeping watch above his own.

We see dimly in the Present what is small and what is great,
Slow of faith how weak an arm may turn the iron helm of fate,
But the soul is still oracular; amid the market’s din,
List the ominous stern whisper from the Delphic cave within, —
“They enslave their children’s children who make compromise with sin.”

Slavery, the earth-born Cyclops, fellest of the giant brood,
Sons of brutish Force and Darkness, who have drenched the earth with blood,
Famished in his self-made desert, blinded by our purer day,
Gropes in yet unblasted regions for his miserable prey;
Shall we guide his gory fingers where our helpless children play?

Then to side with Truth is noble when we share her wretched crust,
Ere her cause bring fame and profit, and ’tis prosperous to be just;
Then it is the brave man chooses, while the coward stands aside,
Doubting in his abject spirit, till his Lord is crucified,
And the multitude make virtue of the faith they had denied.

Count me o’er earth’s chosen heroes, — they were souls that stood alone,
While the men they agonized for hurled the contumelious stone,
Stood serene, and down the future saw the golden beam incline
To the side of perfect justice, mastered by their faith divine,
By one man’s plain truth to manhood and to God’s supreme design.

By the light of burning heretics Christ’s bleeding feet I track,
Toiling up new Calvaries ever with the cross that turns not back,
And these mounts of anguish number how each generation learned
One new word of that grand Credo which in prophet-hearts hath burned
Since the first man stood God-conquered with his face to heaven upturned.

For humanity sweeps onward: where today the martyr stands,
On the morrow crouches Judas with the silver in his hands;
Far in front the cross stands ready and the crackling fagots burn,
While the hooting mob of yesterday in silent awe return
To glean up the scattered ashes into History’s golden urn.

‘Tis as easy to be heroes as to sit the idle slaves
Of a legendary virtue carved upon our father’s graves,
Worshippers of light ancestral make the present light a crime;
Was the Mayflower launched by cowards, steered by men behind their time?
Turn those tracks toward Past or Future, that make Plymouth Rock sublime?

They were men of present valor, stalwart old iconoclasts,
Unconvinced by axe or gibbet that all virtue was the Past’s;
But we make their truth our falsehood thinking that hath made us free,
Hoarding it in mouldy parchments, while our tender spirits flee
The rude grasp of that great Impulse which drove them across the sea.

They have rights who dare maintain them; we are traitors to our sires,
Smothering in their holy ashes Freedom’s new-lit altar-fires;
Shall we make their creed our jailor? Shall we, in our haste to slay,
From the tombs of the old prophets steal the funeral lamps away
To light up the martyr-fagots round the prophets of today?

New occasions teach new duties; Time makes ancient good uncouth;
They must upward still, and onward, who would keep abreast of Truth;
Lo, before us gleam her camp-fires! we ourselves must Pilgrims be,
Launch our Mayflower, and steer boldly through the desperate winter sea,
Nor attempt the Future’s portal with the Past’s blood-rusted key.

Some may recognize this as the basis for the Christian hymn, “Once to Every Man and Nation.