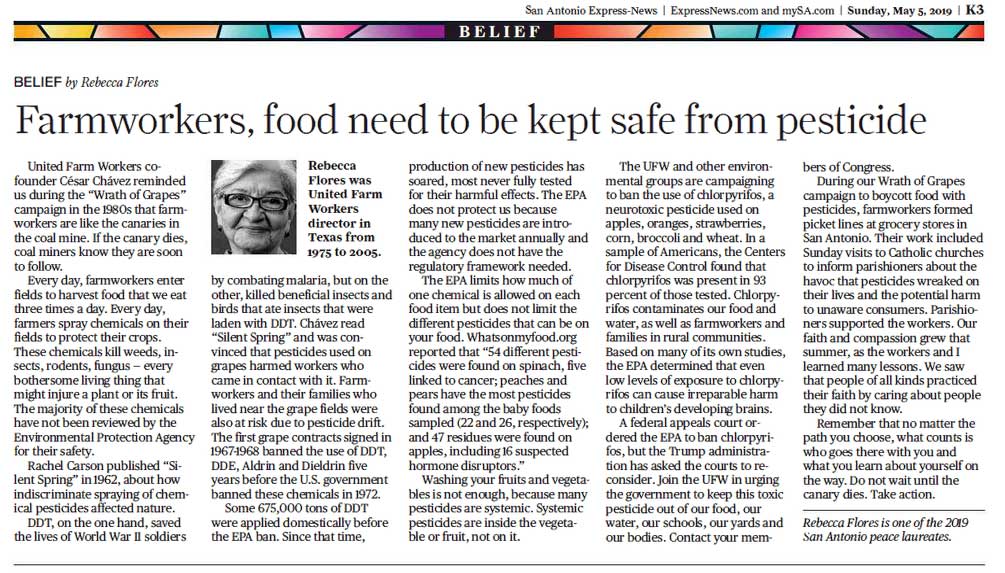 United Farm Workers co-founder César Chávez reminded us during the “Wrath of Grapes” campaign in the 1980s that farmworkers are like the canaries in the coal mine. If the canary dies, coal miners know they are soon to follow.

Every day, farmworkers enter fields to harvest food that we eat three times a day. Every day, farmers spray chemicals on their fields to protect their crops. These chemicals kill weeds, insects, rodents, fungus — every bothersome living thing that might injure a plant or its fruit. The majority of these chemicals have not been reviewed by the Environmental Protection Agency for their safety.

DDT, on the one hand, saved the lives of World War II soldiers by combating malaria, but on the other, killed beneficial insects and birds that ate insects that were laden with DDT. Chávez read “Silent Spring” and was convinced that pesticides used on grapes harmed workers who came in contact with it. Farmworkers and their families who lived near the grape fields were also at risk due to pesticide drift. The first grape contracts signed in 1967-1968 banned the use of DDT, DDE, Aldrin and Dieldrin five years before the U.S. government banned these chemicals in 1972.

Some 675,000 tons of DDT were applied domestically before the EPA ban. Since that time, production of new pesticides has soared, most never fully tested for their harmful effects. The EPA does not protect us because many new pesticides are introduced to the market annually and the agency does not have the regulatory framework needed.

The UFW and other environmental groups are campaigning to ban the use of chlorpyrifos, a neurotoxic pesticide used on apples, oranges, strawberries, corn, broccoli and wheat. In a sample of Americans, the Centers for Disease Control found that chlorpyrifos was present in 93 percent of those tested. Chlorpyrifos contaminates our food and water, as well as farmworkers and families in rural communities. Based on many of its own studies, the EPA determined that even low levels of exposure to chlorpyrifos can cause irreparable harm to children’s developing brains.

A federal appeals court ordered the EPA to ban chlorpyrifos, but the Trump administration has asked the courts to reconsider. Join the UFW in urging the government to keep this toxic pesticide out of our food, our water, our schools, our yards and our bodies. Contact your members of Congress.

During our Wrath of Grapes campaign to boycott food with pesticides, farmworkers formed picket lines at grocery stores in San Antonio. Their work included Sunday visits to Catholic churches to inform parishioners about the havoc that pesticides wreaked on their lives and the potential harm to unaware consumers. Parishioners supported the workers. Our faith and compassion grew that summer, as the workers and I learned many lessons. We saw that people of all kinds practiced their faith by caring about people they did not know.

Remember that no matter the path you choose, what counts is who goes there with you and what you learn about yourself on the way. Do not wait until the canary dies. Take action.

Rebecca Flores is one of the 2019 San Antonio peace laureates.