In the News: S.A.’s hope always there to get us through 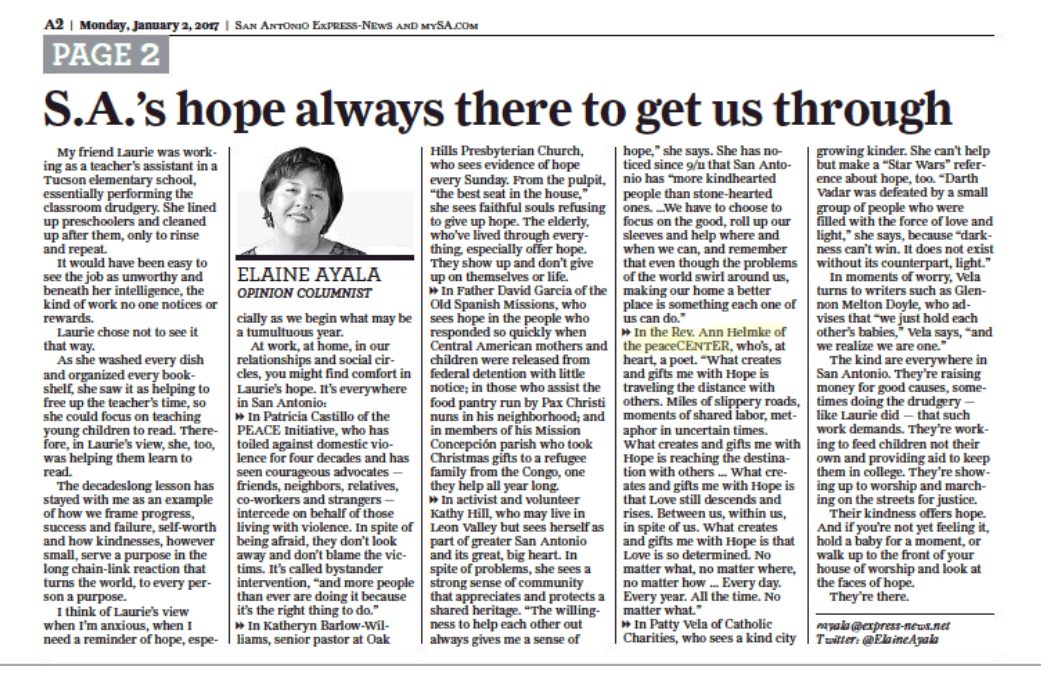 My friend Laurie was working as a teacher’s assistant in a Tucson elementary school, essentially performing the classroom drudgery. She lined up preschoolers and cleaned up after them, only to rinse and repeat.

It would have been easy to see the job as unworthy and beneath her intelligence, the kind of work no one notices or rewards.

Laurie chose not to see it that way.

As she washed every dish and organized every bookshelf, she saw it as helping to free up the teacher’s time, so she could focus on teaching young children to read. Therefore, in Laurie’s view, she, too, was helping them learn to read.

The decadeslong lesson has stayed with me as an example of how we frame progress, success and failure, self-worth and how kindnesses, however small, serve a purpose in the long chain-link reaction that turns the world, to every person a purpose.

I think of Laurie’s view when I’m anxious, when I need a reminder of hope, especially as we begin what may be a tumultuous year.

At work, at home, in our relationships and social circles, you might find comfort in Laurie’s hope. It’s everywhere in San Antonio:

• In Patricia Castillo of the PEACE Initiative, who has toiled against domestic violence for four decades and has seen courageous advocates — friends, neighbors, relatives, co-workers and strangers — intercede on behalf of those living with violence. In spite of being afraid, they don’t look away and don’t blame the victims. It’s called bystander intervention, “and more people than ever are doing it because it’s the right thing to do.”

• In Katheryn Barlow-Williams, senior pastor at Oak Hills Presbyterian Church, who sees evidence of hope every Sunday. From the pulpit, “the best seat in the house,” she sees faithful souls refusing to give up hope. The elderly, who’ve lived through everything, especially offer hope. They show up and don’t give up on themselves or life.

• In Father David Garcia of the Old Spanish Missions, who sees hope in the people who responded so quickly when Central American mothers and children were released from federal detention with little notice; in those who assist the food pantry run by Pax Christi nuns in his neighborhood; and in members of his Mission Concepción parish who took Christmas gifts to a refugee family from the Congo, one they help all year long.

• In activist and volunteer Kathy Hill, who may live in Leon Valley but sees herself as part of greater San Antonio and its great, big heart. In spite of problems, she sees a strong sense of community that appreciates and protects a shared heritage. “The willingness to help each other out always gives me a sense of hope,” she says. She has noticed since 9/11 that San Antonio has “more kindhearted people than stone-hearted ones. …We have to choose to focus on the good, roll up our sleeves and help where and when we can, and remember that even though the problems of the world swirl around us, making our home a better place is something each one of us can do.”

• In Patty Vela of Catholic Charities, who sees a kind city growing kinder. She can’t help but make a “Star Wars” reference about hope, too. “Darth Vadar was defeated by a small group of people who were filled with the force of love and light,” she says, because “darkness can’t win. It does not exist without its counterpart, light.”

In moments of worry, Vela turns to writers such as Glen-non Melton Doyle, who advises that “we just hold each other’s babies,” Vela says, “and we realize we are one.”

The kind are everywhere in San Antonio. They’re raising money for good causes, sometimes doing the drudgery — like Laurie did — that such work demands. They’re working to feed children not their own and providing aid to keep them in college. They’re showing up to worship and marching on the streets for justice.

Their kindness offers hope. And if you’re not yet feeling it, hold a baby for a moment, or walk up to the front of your house of worship and look at the faces of hope.