The Compassion of Traffic Lights: Nothing Happened 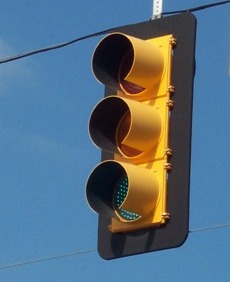 At the beginning of our weekly staff gathering yesterday, Ann Helmke, the peaceCENTER’s director, told us that all the traffic lights went out downtown. We leaned forward in our chairs, primed for a gory story of traffic snarls, blaring horns, some Texas-sized road rage and maybe a dented bumper or two. “What happened?” we asked.

Nothing happened, she told us. Nothing except that everyone was courteous. As if it had been scripted by a cosmic traffic cop, all the cars and trucks politely took their turn at every single intersection. All the cars. Every one.

Compassion — and nonviolence — are often like that. Nothing happens. No one honks or swears or flips the bird or waves a gun out the window. There’s no screaming and no fists are flying. No one is hurt.

San Antonio is no sleepy backwater. This was downtown rush hour in the 7th largest city in the United States. And somehow thousands of drivers realized, without having to communicate, that it would work out if they all cooperated, acted decently. We’re all in this together.

It’s a fragile balance. I bet that one self-important jerk who leaned on her horn or whipped his car into an intersection out of turn might have spoiled the intricate vehicular ballet. But there wasn’t a jerk. Not one.

It doesn’t usually make the news: “Nothing happened today; everyone was kind to each other. Goodbye.” So we tend to dismiss it. But it’s important. We know compassion. We know how to cooperate, how to instantly form a temporary community. We know that my fate is tied up with your fate.

Last night some of us were at Oblate School of Theology to hear Michael Battle, an Episcopal priest who spent two years working with Archbishop Desmond Tutu, speak about Ubuntu, the African world-view of interconnectedness and community. He quoted Dr. Martin Luther King, Jr.: “We are caught in an inescapable network of mutuality, tied in a single garment of destiny. Whatever affects one directly, affects all indirectly.”

That inescapable network of mutuality applies as much to the little things — like broken traffic lights — as it does to the big things — like the civil rights movement. In fact, we learn how to behave in the big, complicated and important things through our experience with the little, mundane and simple things.

Something DID happen yesterday. We had a demonstration that the people of San Antonio are decent, compassionate folks who intuitively understand that cooperation works. That we are all interconnected. And that’s a very big thing.