The Dog and His Master’s Dinner 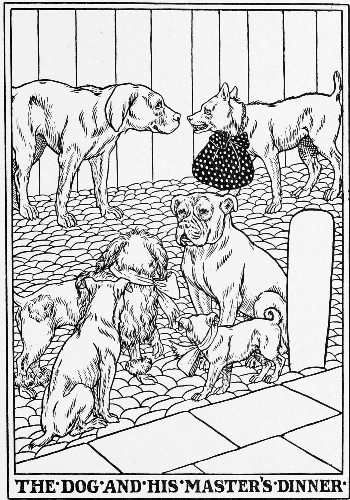 Our eyes are not made proof against the fair,
Nor hands against the touch of gold.
Fidelity is sadly rare,
And has been from the days of old.

Well taught his appetite to check,
And do full many a handy trick,
A dog was trotting, light and quick,
His master’s dinner on his neck.

A temperate, self-denying dog was he,
More than, with such a load, he liked to be.
But still he was, while many such as we
Would not have scrupled to make free.
Strange that to dogs a virtue you may teach,
Which, do your best, to men you vainly preach!

This dog of ours, thus richly fitted out,
A mastiff met, who wish’d the meat, no doubt.
To get it was less easy than he thought:
The porter laid it down and fought.

Meantime some other dogs arrive:
Such dogs are always thick enough,
And, fearing neither kick nor cuff,
Upon the public thrive.

Our hero, thus o’ermatch’d and press’d,—
The meat in danger manifest,—
Is fain to share it with the rest;
And, looking very calm and wise,
“No anger, gentlemen,” he cries:
“My morsel will myself suffice;
The rest shall be your welcome prize.”

With this, the first his charge to violate,
He snaps a mouthful from his freight.
Then follow mastiff, cur, and pup,
Till all is cleanly eaten up.
Not sparingly the party feasted,
And not a dog of all but tasted.

In some such manner men abuse
Of towns and states the revenues.
The sheriffs, aldermen, and mayor,
Come in for each a liberal share.