The Name of the Tree: a Story for Kwanzaa 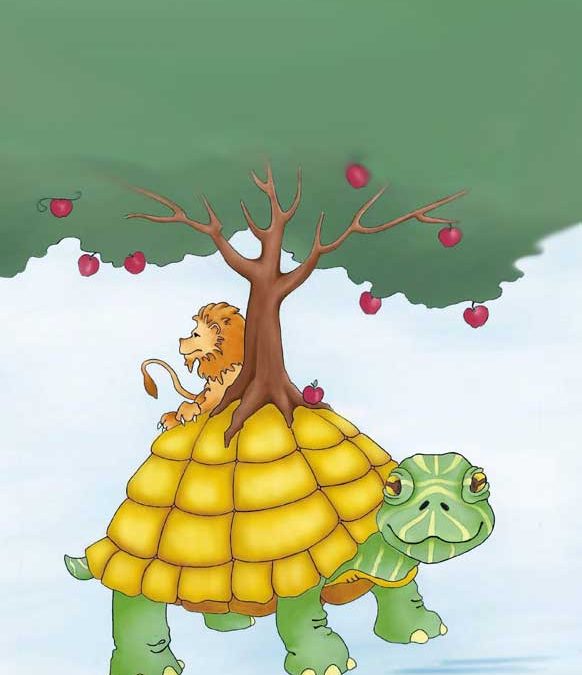 A Folk Tale from the Bantu People

Once there was a terrible drought in the land of the animals. A kindly king came from over the mountain and planted a special tree. He told them that this tree would bear fruit all year round in any kind of weather. All they had to do to get the fruit was to speak its name. The name of the tree was Oowungalema.

The animals thanked the kind old king and he returned to his own land, which was far over the mountain. The animals then sounded the Great Drum to call everyone for miles around.

When all were gathered at the tree, the lion asked Anansi to speak the name of the tree.

“I thought you were going to remember the name!” said Anansi.

“I don’t remember the name!” said the lion, “Someone must know it!”

The hare ran as fast as he could through villages, across the river, through the bush, over the mountain and straight to the court of the kindly old king. The king told him, “The name of the tree is Oowungalema.”

The hare ran back, repeating the name to himself as he went along. On the way home, he stopped at the river to rest and take a drink. The water was nice and cool. It felt good after all that running. The hare splashed around for a while to cool himself off, then he got out of the water and started back to the tree.

When he got back, the animals all cheered. “Now we can have the fruit! ” they shouted.

Try as he might, the hare just couldn’t remember the name.

“We have to send someone else.” Lion said at last.

So the springbok was sent. She ran all the way to the king over the mountain and tried to keep the name in her head all the way home, but coming through the forest, she tripped over a root and bumped her head. The name was lost again.

Next they sent Leopard, but on the way back he started chasing a monkey who was teasing him. He forgot the name as well.

Many others tried and failed until finally, the tortoise asked if she might go. Most of the animals laughed because the tortoise is so slow.

“Give her a chance!” Anansi said, “She may succeed where the rest of us have failed.”

The tortoise went to her mother and asked, “What do you do if you must remember something very important?”

Her mother told her to keep repeating it no matter what happens. So the tortoise set out on her journey. When she reached the king over the mountain, he said, “The name of the tree is Oowungalema.”

Tortoise kept repeating it over and over to herself all the way home. When the monkeys teased her in the forest, she only said, “Oowungalema.”

When she passed by the river and the sound of the water made her thirsty, she looked at the water and said, “Oowungalema.”

And when she got near her house and her children came running to her, she only said, “Oowungalema.”

Finally, the tortoise came to the tree. All the other animals were anxiously waiting. The lion spoke, “Tortoise, please speak the name of the tree.”

At last, the animals were able to eat the fruit. Everyone was grateful to the tortoise who kept to her purpose where every one else had failed.

Kwanzaa is a seven day festival which celebrates the African American culture and history. It is a time of community gathering and reflection. Kwanzaa begins on December 26th, the day after Christmas, and continues until New Years Day, January 1st.

Kwanzaa was created to introduce and reinforce seven basic values of African culture which contribute to building and reinforcing family, community and culture among African American people as well as Africans throughout the world African community. These values are called the Nguzo Saba which in Swahili means the Seven Principles. They are: Umoja (unity); Kujichagulia (Self-Determination); Ujima (Collective Works and Responsibility); Ujamaa (Cooperative Economics); Nia (Purpose); Kuumba (Creativity) and Imani (Faith.) This story is often told to illustrate Nia.