The Pope Writes About . . . “No to the new idolatry of money” 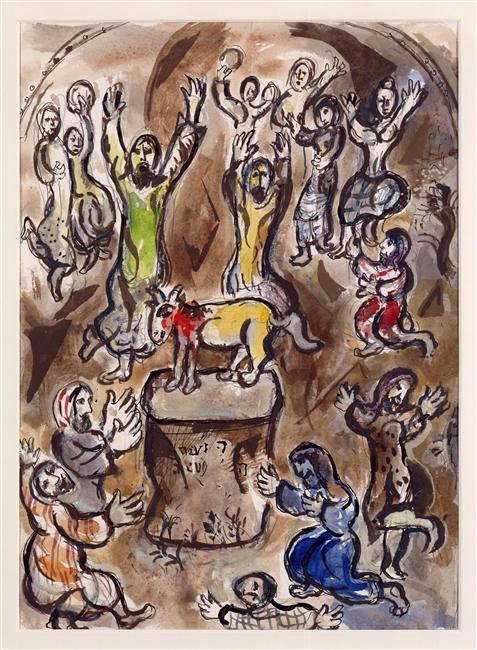 This is the seventh installment about Pope Francis II ‘s encyclical, released last month, Evangelii Gaudium. This section is entitled “No to the new idolatry of money.”

55. One cause of this situation is found in our relationship with money, since we calmly accept its dominion over ourselves and our societies. The current financial crisis can make us overlook the fact that it originated in a profound human crisis: the denial of the primacy of the human person! We have created new idols. The worship of the ancient golden calf (cf. Ex 32:1-35) has returned in a new and ruthless guise in the idolatry of money and the dictatorship of an impersonal economy lacking a truly human purpose. The worldwide crisis affecting finance and the economy lays bare their imbalances and, above all, their lack of real concern for human beings; man is reduced to one of his needs alone: consumption.

The Pope delves deeper into the worship of the free market economy in this paragraph. The episode of the golden calf is one of the most vicious in the Bible: God was really, really angry. 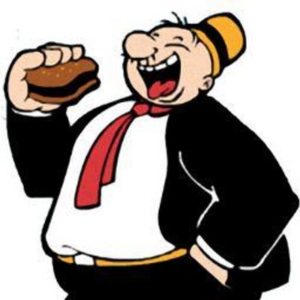 Researchers at Northwestern University recently conducted an interesting study about the effects calling people “consumers.” Participants were presented with the following hypothetical scenario: There is a water shortage, and four people must share a well. Sometimes in the experiment participants were called “consumers,” and other times they were referred to as “individuals.” When participants were labeled as “consumers,” they were more likely to selfishly focus on their own individual consumption. The researchers noted, “The ‘consumers’ rated themselves as less trusting of others to conserve water, less personally responsible and less in partnership with the others in dealing with the crisis.” You can read more about the study in the Journal of Psychological Science. At the peaceCENTER we use the Popeye cartoons to illustrate the cycle of violence. Wimpy, pictured at left, is one of the recurring characters — the consumer, living in debt, an anxious man, always eating yet always hungry.

56. While the earnings of a minority are growing exponentially, so too is the gap separating the majority from the prosperity enjoyed by those happy few. This imbalance is the result of ideologies which defend the absolute autonomy of the marketplace and financial speculation. Consequently, they reject the right of states, charged with vigilance for the common good, to exercise any form of control. A new tyranny is thus born, invisible and often virtual, which unilaterally and relentlessly imposes its own laws and rules. Debt and the accumulation of interest also make it difficult for countries to realize the potential of their own economies and keep citizens from enjoying their real purchasing power. To all this we can add widespread corruption and self-serving tax evasion, which have taken on worldwide dimensions. The thirst for power and possessions knows no limits. In this system, which tends to devour everything which stands in the way of increased profits, whatever is fragile, like the environment, is defenseless before the interests of a deified market, which become the only rule.

The Pope makes it quite clear here that governments are “charged with vigilance for the common good” and that this duty is being hampered by the tyranny — interpret that as fear — of the unfettered free market economy. In an earlier post I talked about income inequality, which he mentions here. An Associated Press article in today’s Express-News says that economists claim that income inequality is slowing the US economy: “Higher pay and outsize stock market gains are flowing mainly to affluent Americans. Yet these households spend less of their money than do low- and middle-income consumers who make up most of the population but whose pay is barely rising,” the economists said. In a speech this month, President Barack Obama called income inequality “the defining challenge of our time.”

This is not easy. We have seen in this country that the drive to reduce the Federal deficit — probably a good thing — results in cutting needed services, such as food assistance and unemployment benefits — probably a bad thing. (Note that deficit is not the same thing as debt: the deficit (now $680 billion) is the difference between how much the federal government spends and how much it collects in one year. The national debt (currently $17.1 trillion) is the total amount we owe.) Pope Francis isn’t offering an economic blueprint — he’s recommending a third way. Not (most emphatically) Marxism. Not unfettered capitalism. A new way that we need to discover. A way of balance.