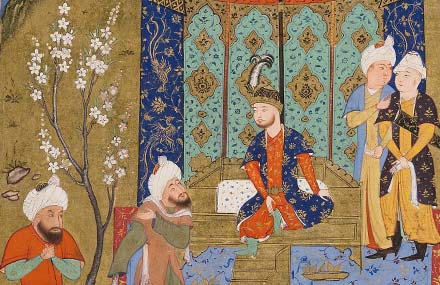 Long ago, in the city of Baghdad there was a caliph.

One day a son was born to him. It was his first born. In celebration, he ordered a feast to be held. To the feast he invited all the great and well-known people in the land.

On the day of the feast all the guests arrived, each bringing a gift for the child. There were gifts of gold, rare jewels, rich tapestries, carved marble. Everyone brought a gift – except one young sage called Meheled Abi. He came empty-handed. The caliph, taking offense, ordered the guards to seize Meheled Abi. Roughly, the guards dragged the young sage before the caliph, who demanded, “Why do you come without a gift?”

The young sage shrugged and answered, “These others, they bring visible riches; they bring gold, jewels, carpets. But my gift is an invisible wealth. It is this. Each day, when the child is old enough to hear, I will come to the palace and tell him stories. When he is grown, he will be wise and compassionate.”

Meheled Abi did as he promised. Each day he came to the palace and the young boy grew up hearing stories. After many years, the old caliph died and the young boy, now grown, succeeded his father. Just as Meheled Abi promised, the new caliph was wise and compassionate, more so than any ruler before him. And when he died, at his request a tomb was erected in the heart of the city with these words inscribed in stone: “If I am wise, it is because of the seed sown by the tales.