The Tiger and the Frog 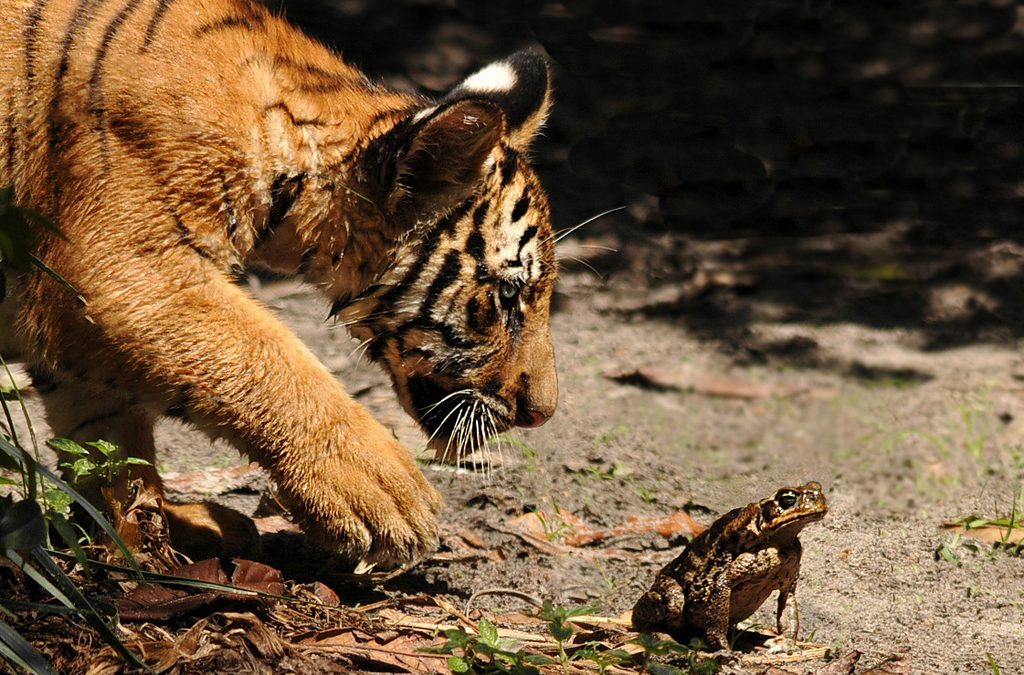 The tall strong pine is a great help, for with its support the weak vine may climb as high.
Tibetan Proverb.

ONCE upon a time, in the days when the world was young and all animals understood each other’s languages, an old, old tiger named Tsuden went out hunting for some food. As he was creeping quietly along the banks of a stream a frog saw him and was badly scared. He thought, “This tiger is coming to eat me up.” He climbed up on a little bunch of sod and when the tiger came near, called out, “Hello, where are you going?”

The tiger answered, “I am going up into the forest to hunt something to eat. I haven’t had any food for two or three days and I am very weak and hungry. I guess I’ll eat you up. You’re awfully small, but I can’t find anything else. Who are you, anyway?”

The frog replied, swelling up as big as he could, “I am the king of the frogs. I can jump any distance and can do anything. Here’s a river, let’s see who can jump across.”

The tiger answered, “All right,” and as he crouched ready to jump, the frog slipped up and got hold of the end of his tail with his mouth, and when the tiger jumped he was thrown away up the bank across the river. After Tsuden got across he turned around and looked and looked into the river for the frog. But as the tiger turned, the frog let loose of his tail and said, “What are you looking for, old tiger, down there?”

The tiger whirled quickly, very much surprised to see the frog away up the bank behind him.

Said the frog, “Now I beat you in that test, let’s try another. Suppose we both vomit.” The tiger being empty could only throw up a little water, but the frog spit up some tiger hair. The tiger much astonished asked, “How do you happen to be able to do that?” The frog replied, “Oh, yesterday I killed a tiger and ate him, and these are just a few of the hairs that aren’t yet digested.”

The tiger began to think to himself, “He must be very strong. Yesterday he killed and ate a tiger, and now he has jumped farther than I did over the river. Guess I’d better slip away before he eats me.” Then he sidled away a little piece, quickly turned and began to run away as fast as he could, up the mountain.

He met a fox coming down who asked, “What’s the matter, why are you running away so fast?”

“Say,” the old tiger said, “I met the king of all the frogs, who is very strong. Why, he has been eating tigers and he jumped across the river and landed farther up the bank than I did.”

The fox laughed at him and said, “What, are you running away from that little frog? He is nothing at all. I am only a little fox, but I could put my foot on him and kill him.”

The tiger answered, “I know what this frog can do, but if you think you can kill him, I’ll go back with you. I am afraid you will get frightened and run away, however, so we must tie our tails together.”

So they tied their tails fast in a lot of knots and went down to see the frog, who still sat on his piece of sod, looking as important as he could. He saw them coming and called out to the fox, “You’re a great fox. You haven’t paid your toll to the king to-day nor brought any meat either. Is that a dog you’ve got tied to your tail and are you bringing him for my dinner?”

Then the tiger was frightened, for he thought the fox was taking him to the king to be eaten. So he turned and ran and ran as fast as he could go, dragging the poor fox with him, and if they are not dead, they are still running to-day.