Why The Crocodile Does Not Eat The Hen 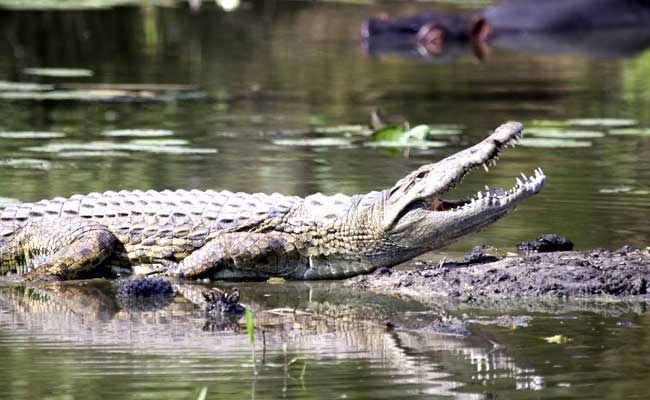 A Folk Tale from the Congo

THERE was a certain hen, and she used to go down to the river’s edge daily to pick up bits of food. One day a crocodile came near to her and threatened to eat her, and she cried: “Oh, brother, don’t!”

And the crocodile was so surprised and troubled by this cry that he went away, thinking how he could be her brother. He returned again to the river another day, fully determined to make a meal of the hen.

“Bother the hen!” the crocodile growled as she once more turned away. “How can I be her brother? She lives in a town on land; I live in mine in the water.”

Then the crocodile determined to see Nzambi about the question and get her to settle it, and so he went his way. He had not gone very far when he met his friend Mbambi, a very large kind of lizard.

“Oh, Mbambi!” he said, “I am sorely troubled. A nice fat hen comes daily to the river to feed and each day, as I am about to catch her and take her to my home and feed on her, she startles me by calling me ‘brother.’ I can’t stand it any longer, and I am now off to Nzambi to hold a palaver about it.”

“Silly idiot!” said the Mbambi, “do nothing of the sort, or you will only lose the palaver and show your ignorance. Don’t you know, dear crocodile, that the duck lives in the water and lays eggs? The turtle does the same, and I also lay eggs. The hen does the same, and so do you, my silly friend. Therefore we are all brothers in a sense.”

And for this reason the crocodile now does not eat the hen.