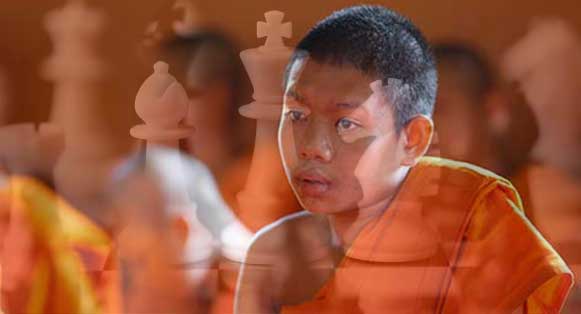 Once a young man came to the Abbot of a monastery and said, “I really want to become a monk but I haven’t learned anything of importance in my life. Only thing i know is how to play chess because that’s what i have been learning from my father from young age but I want to get lead the path of enlightenment and playing chess doesn’t lead to enlightenment. Beside, I was told that all games are sinful.”

The Abbot replied, “Yes they can be sinful but they can also be diversion. Perhaps monastery need little of both.”

So, the Abbot called for a chessboard and summoned a monk from monastery to play with young man. However before game he said, “We may need diversion but we can not have everyone playing chess here all the time. So, only the best player will stay. If a monk loses he will have to leave the monastery creating an opening for a young man in monastery.”

Everyone knew that the Abbot was very serious about what he said. Then the game began.

When the game started the young man knew he could win and played aggressively but as time passed He notice the saintly look in the monk’s eyes who was playing against him. Suddenly the young man began to play badly thinking that he would rather lose to this saintly monk as he felt that presence of this monk in monastery will prove more useful to the world then him.

The Abbot, who was there watching all this, understood young man feeling and suddenly overturned the chess board onto the floor and said to young the man, “You have learned far more than you were taught.”

The Abbot continued and said, “My dear, You have power to concentrate which is necessary to win and you are also capable of fighting for what you want but with all that you also have compassion and ability to sacrifice yourself for others. You have shown yourself as capable of balancing discipline and mercy. You are welcome to our monastery.”